The Metropolitan Museum of Art

This epic event which rivals OSCARS is a fashion event is underwritten by uber philanthropic Christine Schwarzman and VOGUE magazine’s, Anna Wintour, Rihanna, Ms. Clooney, and Donatella Versace. It’s a night which hosts the most beautiful people in the fashion industry and features the most over the top gowns and the highest priced gowns that will never hit stores. The actual Met Ball tickets are $30,000 each, and not just anyone can attend. All guests must be approved by the VOGUE magazines editor in chief, Anna Wintour The last year I attended, I was a guest of designer Mr. Dennis Basso’s. That was 2006. In 2005, I wore Chanel. 2004, I wore Azzedine Alaia. And in 2003, I wore Zac Posen. There was no social media. Only a few celebrities attended, and it was a sea of New York City’s who’s who. As a member of the Costume Institute, it was an honor to be invited every year. The Costume Institute is an ‘invited only’ organization at the Metropolitan Museum of Art. There were only 20 invited women to be a part of the Institute. It was an honor to be asked and to be a part of such an esteemed group. I even had the luxury to write AMERICAN STYLE for the Metropolitan Museum of Art. Let’s bring you up to speed. 2018. Last night my daughter Teddy and her friends stood outside of their high school and screamed at all of the stars as they drove by. Actor Anselm Elgort put her friends on his Instagram story, and comedian Jimmy Fallon sweetly responded to the enthusiastic senior Catholic high school girls. From the looks of the Instagram story, it looked like the girls were running after Jimmy’s car. In pure Fallon style, he was so cute and rolled down his window! 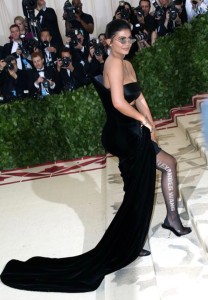 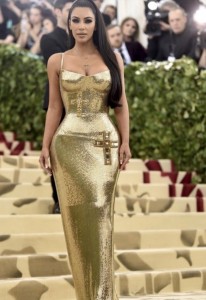 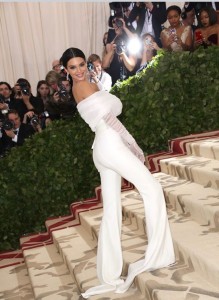 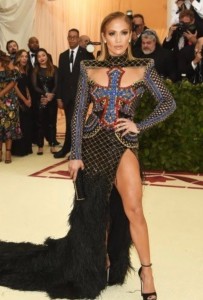 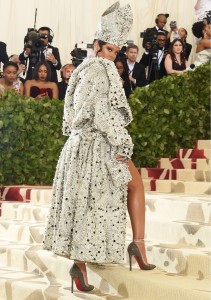 On the epic red carpet, actress Blake Lively needed a troupe of handlers to walk her velvet Versace train around, Rihanna’s Margiela inspired mid 1960s papal tiara embodied the essence of Future Era church chic, Katie Perry’s six foot wings took Victoria’s Secret to a new level. Apprarently, her convertible car drove 10 miles per hour to get her to the museum. She peeked out like an epic bird with her massive wings. The Olson twins offered a respite of ethereal and calm. Meanwhile in the halls of the MET, the Kardashian Jenner trifecta were filming for VOGUE’s Instagram. Kylie in Alexander Wang sauced it up in velvet with cut outs and curves, while and Kim’s golden Versace Academy Award dress flanked the arctic white and simple Kendall Jenner.

Sky High in Thigh High: Thigh high boots are everywhere this fall season! I wore my black Stuart Weitzman pair to my Barneys New York meeting with leggings and a Charlie by MZ camp shirt and a skinny scarf. For my denim line meetings, I wore my grey suede thigh highs to draw attention to my legs! I even love my thigh high ballet flat boots from Azzedine Alaia with dresses. When are thigh highs…